I've heard conversation coming out of animal pens that is more intelligent than what is going on in here.
Post Reply
101 posts

Thats a cool feature, might make it worth a game by itself. Then they go and ruin everything and show a gameplay clip where the entire field jump 60ft to face another jump and double off that. Why, why must you torture me? 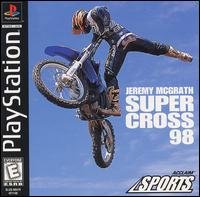 Can't remember if Supercross Circuit had it too, I thought there were a few.

Excitebike Play Choice 10 had a track editor. Jammer and I would buy a pizza and pump the game with tons of minutes and found a glitch where if you jump high enough you go through the top and come up out of the ground and keep riding.

So, I ended up getting it. You told me a few months ago I'd play the game within a few hours of release I'd not believed you even if you handed me a code for the game when telling me that. Overall, its not bad. The Realistic mode is actually pretty good while still being an arcade game. The tracks are the biggest let down as they are scanned in but still edited to hell and back to force sections. The lanes that are all natural are some of the funnest ones but then there are some with odd spacing and unusual height differences and it feels all off. Plus side to that means that custom made tracks will be really fun if well done. The career mode seems to be what we expect from Milestone, and with all the XP bonus you get from the Realism physics/AI I got parts for my bike after one race and full gear kit after two more so won't have alot to look forward to but the game itself is fun enough for the reasons I bought it for. Haven't played with the Track editor myself yet but when I get more time to actually learn it I will.

Speaking of learning, holy hell their default button layout was a trip. My MXS one wouldn't work out well as I had a weird one so I just went with it but my right hand was doing overtime work. Also, how do you scrub? I tried a few times and couldn't get anything going.

Putting visual differences aside with the graphics, what is different about the physics in these games and how they handle jumps/bumps/corners/whips/etc. I don't see much.

I honestly think MTX looks better (not graphically) but the way the rider moves his torso and upper body, the way the bike handles in the air... I am hoping All Out has something better to offer, which I think we might all be shocked, just wait and see, I personally will not be buying Supercross though.
Top

I have to say.. it ended up being better than I expected once I played it myself, but I feel like they could have done way more here and it's obvious they had no idea what they were doing when making these tracks (3D scanned sure, but heavily edited). They got a little bit better with having a little bit more momentum in some sections, but I still struggle to find any sort of smooth lines through the whole track. The AI is well... disappointing. I immediately set all the race options to realistic right after I booted the game up and won my first heat race no problem. And to add to that the AI don't seem to throw their own whips anymore like they did in MXGP3. Makes sense tho since they can barely get around the track without casing literally everything. I have yet to try the track editor, but something tells me it wont be incredible (correct me if you think I'm wrong). I play on an xbox one and it gets pretty laggy for me on just about every start so hopefully they fix that soon.

All in all I think what they did here is ok. I am definitely more excited for MX vs ATV as the fun factor looks to be much better from what I can tell already. However, I hope milestone continues to improve and I can still appreciate what they are trying to do.

All in All, im having more fun that what i expected. Sure the physics are far from perfect and still way too arcade but i surprised myself having fun! I have not jumped online yet but here are my review from the career mode:

- AI are dumb AF and way too slow
- They 3D scanned the tracks but some of them need more work... some rythem sections feel forced and doesnt flow well (some tracks are way better than some others)
- I love the sound of 250 and it changes with each exhaust company (love the fmf sound!)
- There are some bugs (that will be fixed by a patch i guess) ... sometimes it put you on a 450 in the 250 career, if you see that just close the game and re open it you will be back on a 250.. also the menu in career bug quite often (i have to force close the game and re open it)

Overall, im sure it will be fun to race for fun against friends online and on some user made tracks that will flow better (SD is the WORST track, jesus look at the rythem sections)
Phil Doyon #423
Top

I am interested in seeing how the multiplayer is, I think that what will sell it for me.

Either way it's pretty cool to see 2 MX games being released in one year!
Top

The multiplayer is super fun, was playing with some guys in discord las night and had a blast. It’s far from perfect, mainly the laggy player to player connection but at least for me it doesn’t ruin the experience. There is also an issue where the tuff blocks don’t get reset so you get to play enduro mode from lap 2 on. But that should be gone with an update

What system is everyone playing On? PC?
Top

I'm on PC version trying to just get into the damn menu. Had a couple random freezes yesterday and now I've retried 5 times and rebooted once to be sure. Too bad it needs to connect to even play career or whatever. DDoS? Wouldn't be surprised one bit.

I have had a few random crashes and freezes as well. Twice when I was in the Career menu, I could not back out into the home menu nor could I select anything. Also, was playing online within the last hour and a few of us in the lobby were getting random resets. It always seemed to happen when we got close to one certain rider though..

Users browsing this forum: No registered users and 16 guests