Round 5 (last round) of the BG Winter Series is in 5 hours 41 minutes. THIS WEEK I WILL NOT BE ADDING ANYONE. SIGN UP BEFORE SIGNUP AND QUALI CLOSES IN 1 HOURS 42 MINUTES!
https://mxslobby.com/race.php?race_id=378

ur team pack should be above this.
IG:@mxs.battlegrounds
Top

this admin has something against the BR, because I was leading the main event he comes and the BLACK FLAG and black flag to Junior Benevides, both of which are license C! He says that he does not want to run his races any more and he's still on a permanent ban

Final Points Standings - If you didnt race 3/5 races, Your points were not accumulated.

GilsonFormentao wrote:this admin has something against the BR, because I was leading the main event he comes and the BLACK FLAG and black flag to Junior Benevides, both of which are license C! He says that he does not want to run his races any more and he's still on a permanent ban

No personal vendettas. Alemao was kicked for racing INT when he is capable of being in pro.
Results from round 1 in which he beat the racer who won points.
https://mxslobby.com/race.php?race_id=365#results 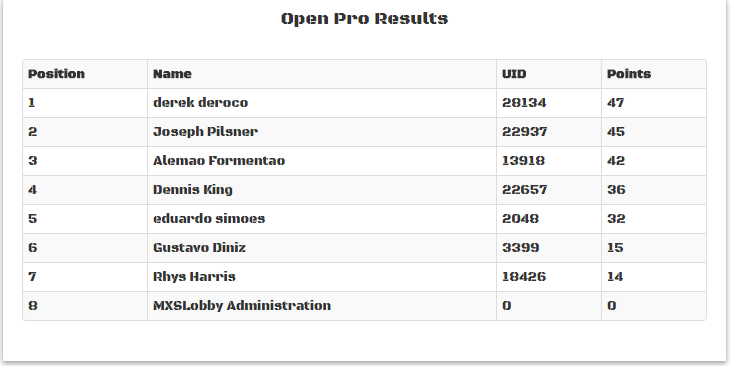 Junior was kicked and banned for punting, for a third time on my server.

I kicked 4 riders for blocking/taking leaders out while under blue flag. Sorry for hosting races for people who are RACING and not people who have shitty re-entries and punt.

^Said kicks were worthy.
I did not kick lappers who got the fuck out of the way.

After I kicked Alemao for being checked out in lap 2 as he isnt a int racer, I got a dozen "fuck you"s . That is why he will not be unbanned. I dont even know what BR is. Or care. I host for fun and tonight about a dozen of you were doing everything you could to ruin that. Good attempt though.
IG:@mxs.battlegrounds
Top

Also - Please read this email from Sammy himself. I make it clear your licensing is completely irrelevant to me and idgaf what class you race in EMF. Theres too many racers for them to monitor. 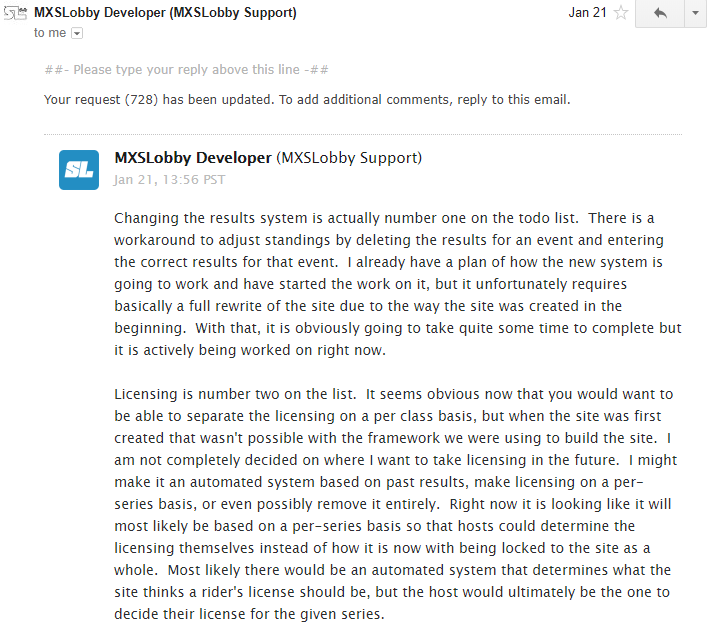 Fabio Guido also raced ADV when he won Pro last week. Its you kids signing up in slower classes to put your name on top of quali and/or sandbag the races. I put too much work into my hosting to have people WHO DONT EVEN RACE THE SERIES come in and work to ruin it. Don't show up next time. Your ban won't be uplifted. Idc what others say/think. I dont host for people like you. I host for people like the other 50+ people who enjoyed themselves.
IG:@mxs.battlegrounds
Top

As he admitted his licensing system isn't accurate, It is MY JOB to make sure youre not blowing classes out of the water. Which I did 4 rounds ago and you STILL SIGNED UP IN INT LIKE A FUCKWAUD. Totally my fault

dabzzz is an amazing host, everyone should appreciate his hosting!! Thanks Dabzzzz. he does amazing races 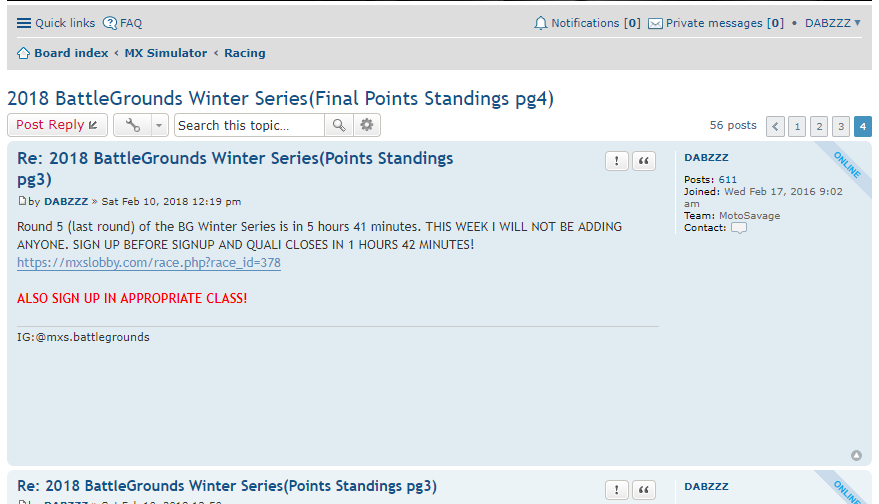 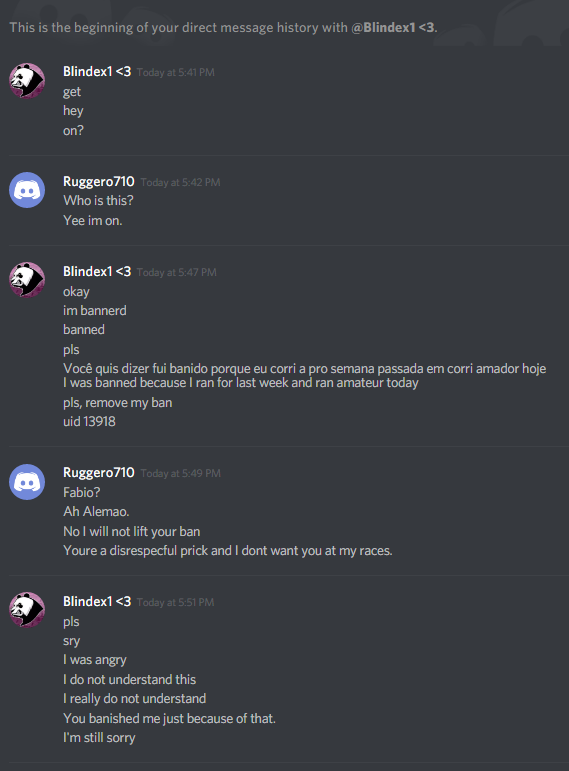 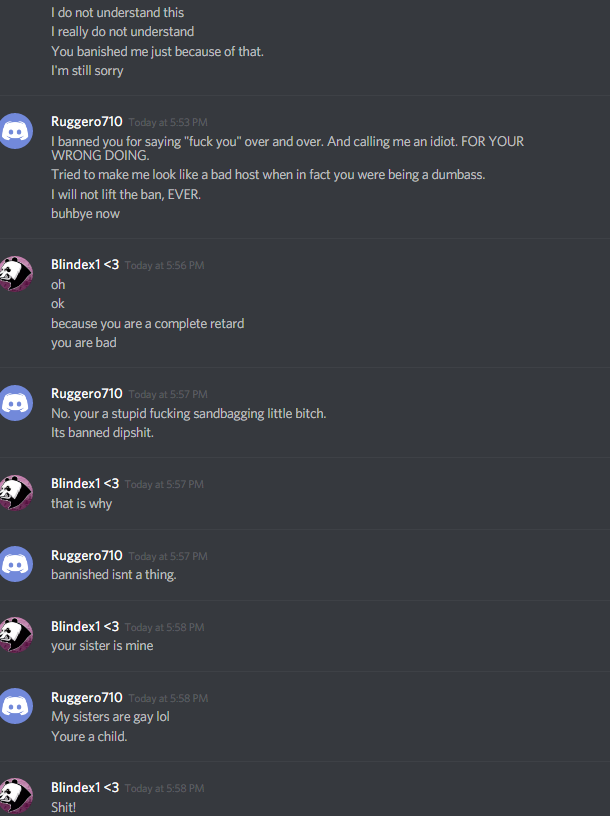 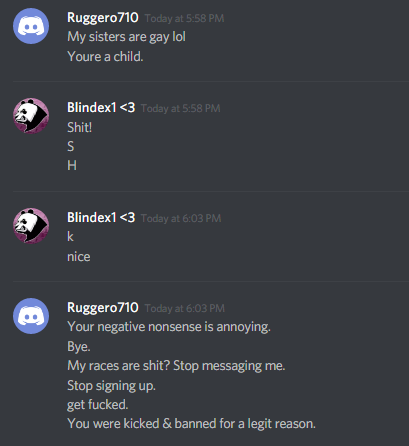 over this & you.
IG:@mxs.battlegrounds
Top

fun race tonight my dude lots of close and clean riding, thanks for keeping the trash out!!!!!!!!!

I apologize to everyone I have offended, I was a great inrresponsavel, greatly to the admin DABZZZ, and to all! It will be an honor to return to participate in his races!
Top
Post Reply
63 posts