by MxSimulatorMods
I think it's during the evening. You can try to find the best hours by analysis the server page : https://mxsimulator.com/servers/server.mxsrank.com/

MxSimulatorMods wrote:I think it's during the evening. You can try to find the best hours by analysis the server page : https://mxsimulator.com/servers/server.mxsrank.com/

Just made an account today and I love it.. I think JLV needs to promote the crap out of this to make it truly effective (Highlight it at the top of the server index, be an option in game to automatically load to that server, as well as a requirement to make an account. Once you can regularly get the server having 10-20 guys, 24/7, then this will be an incredible boost for this game's success. I know personally I only really try in rF because there's something on the line, and this gives me the similar desire to play and race knowing everyone else is trying their best as well.

The growth of this game will come when you need more servers 24/7 just to deal with the traffic and I think if JLV can build this into the game more it will make a difference. Just my two cents.

Wish it came sooner, thanks a bunch!!

Just so you know I think the server messed up??

The guys that just raced all had their ELO reset, not sure why this was?

Any idea why?
Thanks

by Logeyboy
Due to ban of MxWay, the founder of MxsRank.com. He can't update this topic.
He asked me to post the changelog of all news from the last few months :

Fix issues :
- Optimisation of all scripts (restart take less than 5s now)
- Fixed of lot of issues about calculation of Elo
- The ragequit penality is now applicated at all players who left the race between the first gate and finish flag.

MxWay wrote:My last changelog is old on this forum. Due to I pushed the biggest update of MxsRank this Monday, I will resume you the last changelogs.

I think this update was the hardest I never push on MxsRank. Thanks to JLV to had develop me the redirect feature and allow me to create the first cross-server on Mx Simulator.
-----

Server Update:
==========
- Unlimited slots.
- Matchmaking system based on the Elo when many servers are playable : At the connection, you will be redirect in the server where the Elo average is near than your Elo.
- The server will automatically switch in two servers when more than 25 players are in.
- The server will automatically merge with other one when less than 12 players are in.
- The Elo average of all players in the race is now display in the beginning.
- Erode is now available.


Website
==========
- Demo files of 7 last days are automaticaly saved in the website
- Protest form was updated : The form is pre-filled with the informations of the selected race (time of restart, players, track, ...). It will be easier for me to check.
- You have 72 hours to report player.

Have fun ! And thanks to make MxsRank my dreaming project !

james31216 wrote:why do i keep getting black flaged at the start

If you don't have an account I on their website that could be it but I don't necessarily know.

by mxalex85
Hello boys
Where can i found Work hard play hard sx truck ?
Thank you

MxWay wrote:Happy Birthday MxsRank !
Thank you all riders from making MxsRank the 1st server of Mx Simulator. It's better than in my dreams !

I hope you enjoyed this year and will enjoy the next. 2020 will be a big step for MxsRank and MX eSport ! 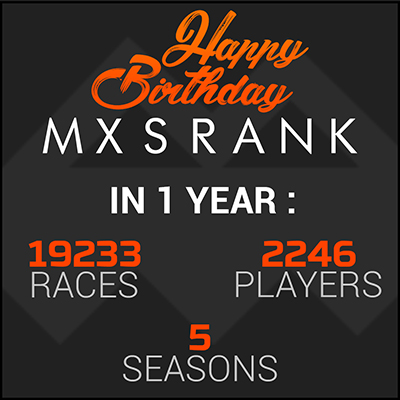