I've heard conversation coming out of animal pens that is more intelligent than what is going on in here.
Post Reply
25 posts

Am I the only one that sees the similarity between those two crashes? They happend on the same side of the stadium, they both happend on Hondas and the way TG and KR crashed also looked pretty similar...Illuminati confirmed

Here are the videos so you can see what I mean
Gajser(start at 0:54)

Gajser runs Showa and Roczen runs KYB, just saying. Gajser had struggled with that section all day, hence why he wasn't tripling it. I think he realized how much time he was losing a lap from not doing it and said fuck it but then carried too much speed for it.

Clip a rhythm section on a Supercross track and see how your bike reacts to it.
Top

Ddavis wrote:Clip a rhythm section on a Supercross track and see how your bike reacts to it.

I'll add that both of them cased the jump with their front end higher than normal, which yes results in a bit of a G-out and going over the bars.
Top

Just because the bike is a Honda doesn't mean the suspension is made by the same manufacturer, let alone similar in any way, shape or form... Lord almighty..
Top

I do understand your logic, I know people give it the whole KYB & Showa thing but are the internals really that different? I think that it's strange that it is always on a Honda. A lot of things effect the feel of a bike not always just suspension. I.e. the frame material, subframe, swingarm and even engine mounts. The common denominator on both crashes is a Honda Also known as a turd with red spray paint. Plus my friend is pro supercross rider and can clip rhythm sections all day with his Showa A-kit suspension that is not even Factory suspension like Tim Gaiser has, plus that face he clipped is not even that gnarly you can case things way more severe with Supercross suspension.
Top

Yes, Seely's shock at MXoN is why Roczen and Gajser crashed. We found the answer guys! Cole Seely is to blame.
Top

DP, Roczen's A2 crash is unrelated as the reason he crashed was due to the left side being rougher and having a kicker on it, Marvin spoke about it in a interview that he was also getting a big kick from running down the left hand side. Cole's Shock collapsed due mud packing under a sleeve I think, and that was said to be a fault with KYB. Also Gajser ran Showa and had no problems with his suspension that weekend so there must be some differences

I don't understand the need for the sarcastic comment DDavis, i'm sure redbull and all your youth "i think i'm a straight shredder" sponsors don't pay you to be a cunt. All I'm trying to do is having a discussion on it as it seems to be weird how the biggest Supercross crash I've seen in recent years was on a honda as well as the americas MXoN hopes being destroyed by a shock in a red bike twice.

You know normally I would laugh at this type of thing... but I am really starting to wonder if there isn't some kind of odd flexing or poor frame geometry that has a strange force on the rear shock.

I mean Roczens big crash is questionable as to what happened, could have been a kick, could have been an odd timing error, who knows other than KR and he probably doesn't even know. Although I would argue both MEC crashes were due to rider error, it's hard to ignore some of the harshness in the kicks they are getting + the two shock failures from Seeley. The crashes can be explained as rider error, the shock from Seeley can be blamed on works parts, but what about this: 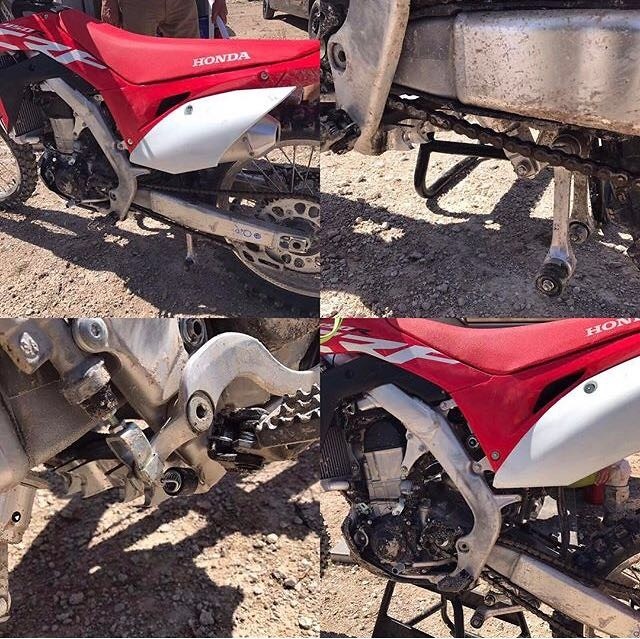 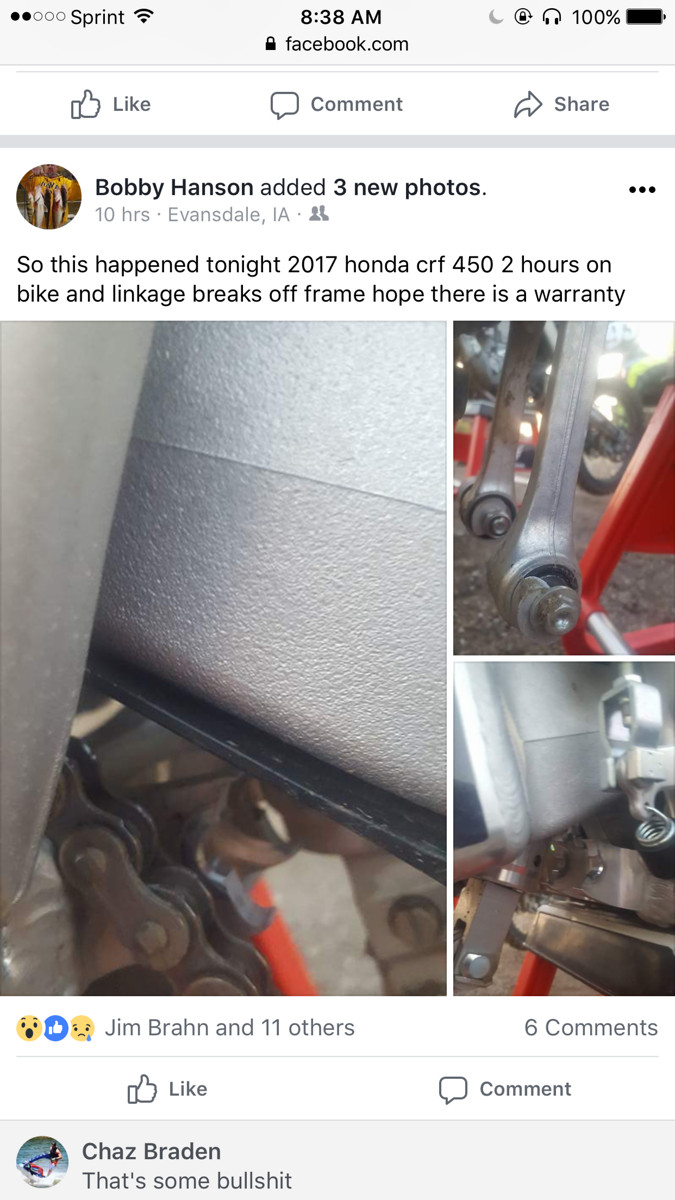 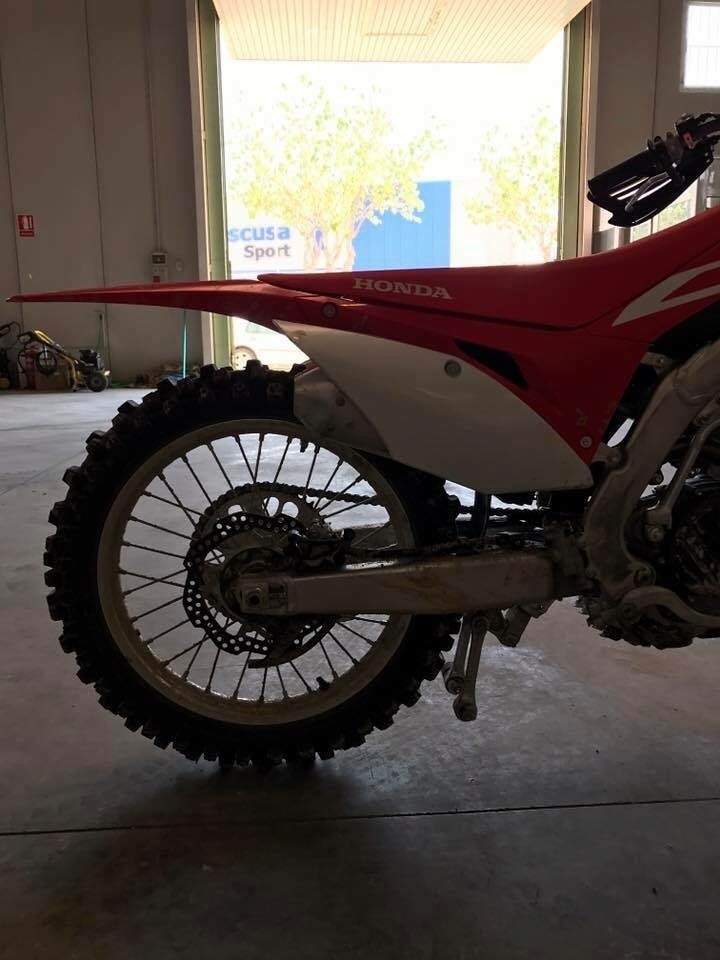 Lets not forget they did have a big change with the rear shock: 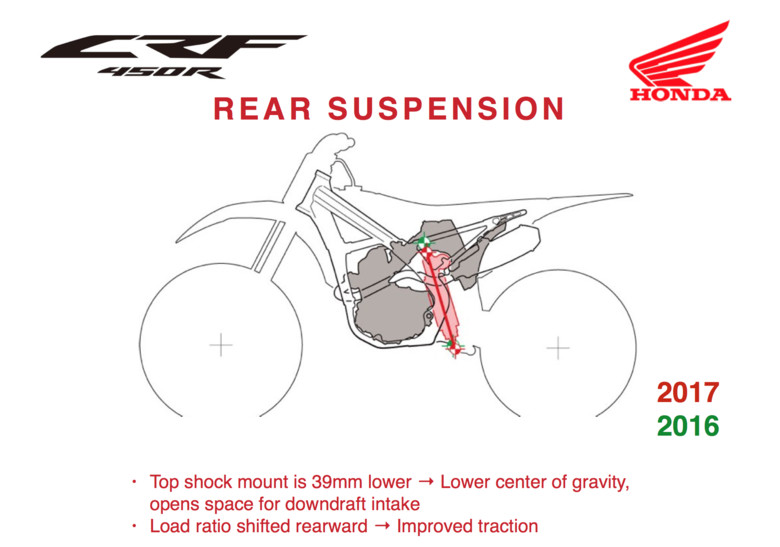 I think the first and third photos are the same bike. However, someone needs to explain why these bikes with less than 50 hours have the frame tabs being ripped off. Honda can say all they want about Seeley's rear shock malfunctions I guess, but something just seems odd here? Suspension brand and components doesn't mean anything if you are possibly getting abnormal force to the rear end.
Top
Post Reply
25 posts