I've heard conversation coming out of animal pens that is more intelligent than what is going on in here.
Post Reply
92 posts

Me and Colton were talking about people coming up to us at races and asking About sim. so what’s some of your guys’ experiences with this? My weirdest/funniest is from this past weekend before my bike tried ending my career.

So I was on the line before my moto and some dude comes up to me and says “yo ur rush chapman from sim, you been killing it and congrats on the title.” Was probably the funniest thing I’ve ever heard but lmk if you guys ever had something Like this happen.

Moxey has had that on a few occasions hes spoke about.

Some random dude at Clubmx asked for my setup and I said $50 and he left.

When I met rush last summer at chillitown, he was really quiet and didn’t talk shit like he does to me in discord. That’s pretty funny to me

Yamahaulin wrote:Probably at the 2016 muddy creek national when Rush talked to me for a solid 5 minutes before telling me his name. Other then that ive had random people ask me for my setup.

MOTOZ293 wrote:When I met rush last summer at chillitown, he was really quiet and didn’t talk shit like he does to me in discord. That’s pretty funny to me

I haven't had any sim experiences irl since I apparently never leave my house, but I had lots of experiences on Vital where people would walk up to me, introduce themselves, then go on the forums and explain I'm not the person I am on here.
Top

I mean there’s a whole thread roasting you...

Ive been in Nate’s basement.

jlv wrote:Here's a picture of my nuts.

jlv wrote:Team Motosport Honda's Brina made MX Simulator history as she became the first woman to take a win in a major series.

My mother dated Sheldon litwiller's dad's friend lmao. We went up to my mother's BF's house and Sheldon came over with his dad and when we heard each other's names we were like tru you play mxs. Small world haha, we shredded pitbikes and mxs for a bit. I never got to go track riding with him though, I didnt bring my bike up, which was stupid because one of the best tracks around was right where my mother's bf at the time lived.

I also met someone through sim at a library. Back in the short time I was a sweaty sim tryhard nerd I was watching an mxs edit on my laptop in a library and this guy walks up to me and he's like is that MX simulator? 3 years later the dude is one of my best friend's and my main riding buddy haha

Also shoutout to one of the OG Premium motospodes. I joined an mxs team "premium motospodes" in like 2014 or something and met a bunch of cool dudes, one being Ed Kozak. We found out after a while that we actually lived within 30 minutes of each other. A year or two goes by and we still haven't met in person and then my parents moved to the same town he lived in, so we lived like 5 min apart. Still didn't meet each other and then awhile later I remember my buddy (actually the buddy from the 2nd story above) was going up to a local track but I didn't have my bike, it was at my father's house so I'm like damn I wanna go riding but I don't have my bike. I call a few ppl to try and get a ride down so I can get my bike ready to go, and for some reason in a last ditch effort I call Ed Kozak who I know lives close but I've never met him. THIS LEGEND picks me up pronto asap and drives me 40 minutes down to my father's house so I could get my bike ready for my buddy to pick up so we can go riding. I'll never forget that day either because as we pull onto my road I see my buddy (who I was going riding with) parked on the side of the road. He Hit the brakes too hard coming up to my road and the water tank In the pickup shifted and smashed the rear window. Still went riding lol threw some blankets down brushed off the glass and had a good time.

So i met Dunivant around 3 years ago. Chris Watts (who has been my best friend since birth) had a team back in 2015 skullcandy. He got dunivant to join and i talk to him once. fast forward a year to late 2015, dunivant and I talked more and we made our own team called NCR. I live in ohio and dunivant lives in Tennesee. That same year in september he came to ohio to film for eastfork and that was the first time i met chase in person. Shiz was dope. We were already pretty close friends by then so it was like being on teamspeak. Fast forward to summer 2016, he came to chillitown MX to film for them. (our friend carsyn's parents own the track) He asked me to come out for a day, and it was only a 2 hour drive so i was cool with it. We hungout when he wasnt on the track filming. After we went to golden corral and he paid for my dinner. Fast forward to summer 2017 he came back to ohio to film for chillitown's regional. at that time i started working for him doing all the sim virtual laps. He asked me to stay the weekend with him at carsyn's house, so i did. By this time we were best friends planning to get a house together in the future. Spent the weekend with them and it was so much fun seeing all the boys and hanging out at the track.

Also, I grew up racing and being friends with Ryan Mahan and Chris Watts, well when i raced 50s, when it was time to move up i had to quit (shits expensive). all of our perents have known eachother forever, so all of us have been friends as long as I can remember.

now a pic from nam

Chris and I trading off turns on the Mini Sr 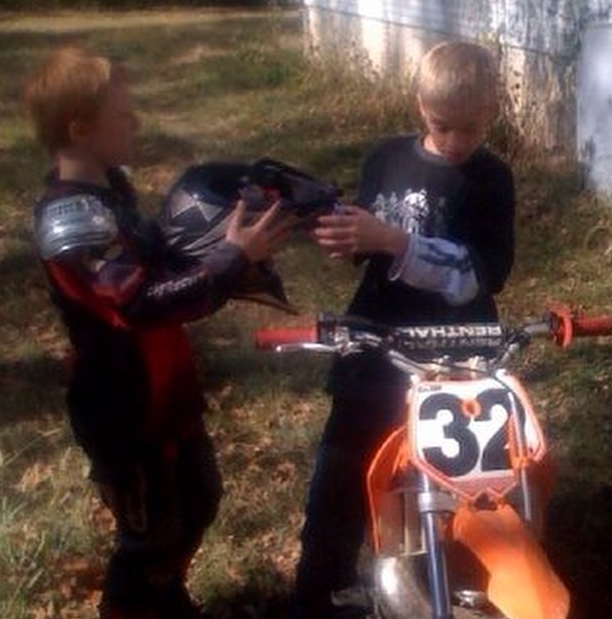